Insurance Industry, Democrats Fight Against Medicare for All

Insurance Industry, Democrats Fight Against Medicare for All: Nearly 30 million people still don’t have health insurance in the United States; among those who do, many are paying enormous premiums that go up year after year. Others rely on crowdfunding platforms for medical care. It’s a grotesque and deadly system, which is probably why universal healthcare polls so well across political lines. Despite all this, a powerful group of establishment Democrats have teamed up with billion-dollar insurance companies, hospitals, and the drug lobby to fight back popular momentum in support of Medicare-for-All. 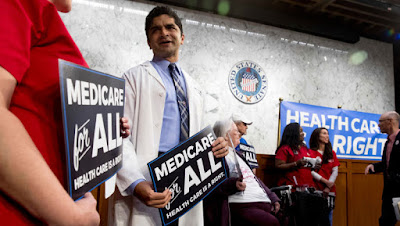