"...learn more about the quiet plan to privatize Medicare.

Price Chaos at US Hospitals – McCanne Health Justice Monitor
Posted by Craig at 11:45 AM No comments:

McCanne Health Justice Monitor "In the short term, Congress should lift the veil of secrecy around private equity ownership of medical assets, e.g. by requiring full disclosure of the ownership structure of firms that bill Medicare. (California already requires pharmacies to publicly report the names of individuals and organizations with any share of ownership, as well as the property owner, management company, and administrator). In the longer term, investor ownership of health care facilities and practices should be banned."
Posted by Craig at 7:58 AM No comments:

U.S. Health System Implosion / Tipping Point U.S. longevity down to 78.5 years, other nations 81-84. U.S. pervasive race disparities in private insurance and health. U.S. health spending twice the wealthy country average. U.S. uninsured = 33 million pre-COVID; underinsured = 1/3 of insured. U.S. healthcare access & outcomes the worst among wealthy countries. U.S. financial barriers to care for sick high in Medicare Advantage. U.S. medical debt skyrocketing, impoverishing and imperiling lives. U.S. insurer profits skyrocketing for years and during COVID. U.S. ambulance services separate, costly, & unreliable. U.S. doctors burning out from billing-laden EHR. Comment: by Jim Kahn Our "system" is no system. Thousands of health plans, summing to premature death and massive profits. By no useful metric is it succeeding. Unbridled corporate greed prevails. It's imploding in front of us. Is it sustainable? It can't be. When is the tipping point? To a simple, logical, efficient & generous, equitable, humane solution. Single payer. Now. (thanks to Eli Marx-Kahn for input) http://healthjusticemonitor.org/
Posted by Craig at 6:00 AM No comments: 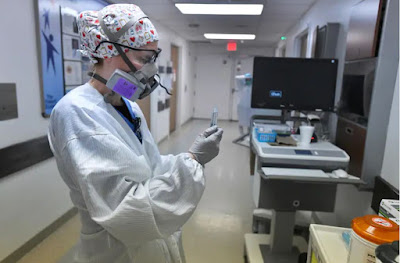