Private Equity is Not Good for Your Health

Why Are Political Barriers to Health Reform So Great?

Why Are Political Barriers to Health Reform So Great?
Posted by Craig at 3:39 PM No comments:

Two Women Prioritize Helping the Public over Protecting the Rich – McCanne Health Justice Monitor
Posted by Craig at 6:45 AM No comments:

What you need to know about Medicare Advantage Article from PNHP 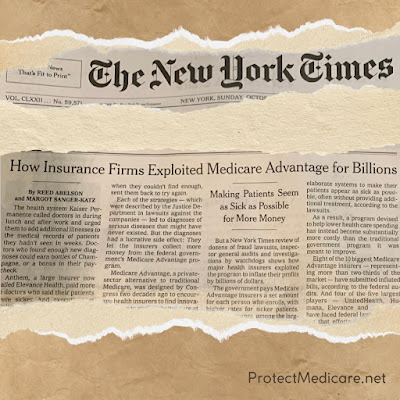 From UpNorthNews First-of-Its-Kind Universal Health Care Referendum on the Ballot in Rural, Red Wisconsin County Voters in Dunn County, which includes the town of Menomonie in western Wisconsin, will have a chance to weigh in on a very important, albeit unusually progressive, question this November: Should the United States provide universal health care? Earlier this summer, the Dunn County board unanimously approved the advisory referendum. Like other referendum questions about abortion rights or marijuana legalization, it won’t change any laws. But advocates say it could eventually lead to change. Why You Should Care This is the first time a referendum like this is on the ballot in Wisconsin, and Dunn County, in many ways, is an unlikely place to have taken up the question. Fifty-six percent of voters in the rural, western Wisconsin county voted for Republican former President Donald Trump in 2020, and only 42 percent voted for Democrat Joe Biden. Democrats have made universal health care one of their policy priorities while Republicans in Wisconsin have resisted expanding Medicaid and other steps in that direction. What Next? Dunn County Board member John Calabrese, who was part of the effort to introduce the referendum, hopes this referendum will be part of a shift away from seeing expanded health care coverage as a left-vs.-right issue. "I think we can speak to this issue in a way that's not partisan," Calabrese said. Wisconsin polls show our state is split on healthcare. During the 2020 presidential primary, the Marquette University Law School poll found 41 percent of respondents favored Medicare for All, while 53 percent opposed it. A different 2020 poll from Change Research found 60 percent of Wisconsin respondents favored lowering health costs, while only 30 percent favored guaranteeing universal coverage. Our View Commentary by Founding Editor Pat Kreitlow Putting this resolution on the ballot was an idea approved unanimously by the Dunn County Board of Supervisors. Every member—conservative or progressive—sees what Republicans at higher levels refuse to acknowledge: America’s healthcare system—controlled in large part by for-profit insurance corporations—is unsustainable. The time for party politics is over, and leaders of all political stripes need to sit down and answer a question about “what would work better” rather than “how can I use this issue to win elections?” Wisconsin voters now have a chance to tell Congress they, too, should move forward with discussions of how a non-profit national health plan could work. People want solutions, not more partisan games. The Bottom Line Universal health care or not, the country's healthcare system needs to change. Dunn County Board member Monica Berrier put it best: "I don't know how anybody can look at this and think it’s a good situation, but it's the system that we're stuck with. We have a responsibility to demand better of the government that serves us." https://mailchi.mp/couriernewsroom/vote-this-week-the-nicest-player-in-the-nl-central-12644163?e=536c8c7421
Posted by Craig at 9:35 AM No comments: