Should we support the individual mandate? - YouTube
Posted by Craig at 3:03 PM No comments:

Patients Gain Access to Clinical Notes Next Week | MedPage Today
Posted by Craig at 6:43 AM No comments:

Dua Lipa Gets Real With Sen. Bernie Sanders About 'Completely Free' Health Care in the UK | Billboard: It's no secret that Bernie Sanders is passionate about universal health care.
Posted by Craig at 8:45 AM No comments: 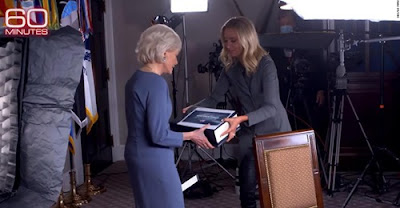 BUT - Nobody Tells Them Hospital Bills For Uninsured COVID-19 Patients Are Covered Under The CARES Act : Shots - Health News : NPR: The CARES Act provides funds to pay medical bills for uninsured COVID-19 patients. But a young man's death in Nashville, Tenn., shows people often don't know about the program until it's too late.
Posted by Craig at 7:27 AM No comments: 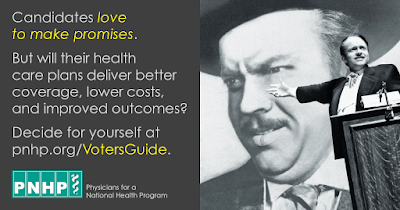 Webinar: Dr. Ed Weisbart on candidate health plans - YouTube: Candidates love to make promises about their health care plans. But how can you tell if those plans would address our most pressing problems? Visit pnhp.org/...
Posted by Craig at 5:34 AM No comments:

Column: UnitedHealth's profits show it's great to be an insurer during a pandemic - Los Angeles Times

Column: UnitedHealth's profits show it's great to be an insurer during a pandemic - Los Angeles Times: Even after offering policyholders cuts in premiums and copays, the nation's largest commercial health insurer still raked in over $1 billion a month.
Posted by Craig at 12:39 PM No comments:

Our tax money/Medicare $ goes to pay for much of this and the for-profit insurance companies suck up a third of it for high exec salaries and profit.  The insurance companies are NOT providers of health care.  We need to remind ourselves that they make more money by restricting access to health care.  Funding should go directly to providers, not through blood-sucking profiteers.

▶︎ Medicare for All! | Wickline Family and Friends

▶︎ Medicare for All! | Wickline Family and Friends

Great short song
Posted by Craig at 10:06 AM No comments:

The current public/private system is horrendously complex AND expensive. The statement does bring out the simplicity but downplays it by seeming to say much of the complex private and public programs just might continue. NO - the only things that might be created are coverage for non-essential care that was not covered by the new national program providing access for all. We would all have access starting at birth to necessary health care just as we do now for things like calling the fire department or police department, etc. Yes, taxes would cover the cost and their would need to be a process for vendors to get paid. The complexity of the current Medicare payment system must be removed. Hospitals should be put on a budget and have regional boards that help ensure care is provided in their area based on need and not on making a profit. Just imagine a hospital and a doctor's office not having to figure out different billing methods, codes, limits, etc. All those employees would be available to be re-trained to provide preventative community-based programs. Craig Brooks ---------- Forwarded message --------- From: Don McCanne
Posted by Craig at 9:46 AM No comments:

In Rural America, The Pandemic Pummeled The Health Care System : Shots - Health News : NPR: One in four rural households report being unable to get medical care for serious problems, due to the pandemic, according to a new poll from NPR, the Robert Wood Johnson Foundation and Harvard.
Posted by Craig at 7:06 AM No comments:

Big fight over drug pricing heads to the Supreme Court - Wisconsin Examiner: Tuesday the U.S. Supreme Court will hear a case on practices of pharmacy benefit managers reimbursing pharmacies to drive up costs.
Posted by Craig at 7:06 AM No comments:

House Dems Call Out Pharma R&D Claims | MedPage Today
Posted by Craig at 6:52 AM No comments: