WalkerCare: A Bad Prescription for America - Citizen Action of Wisconsin

WalkerCare: A Bad Prescription for America - Citizen Action of Wisconsin
Posted by Craig at 6:25 AM No comments:

Paul Ryan Proposes Re-Allowing Insurance Companies To Discriminate Based On Pre-Existing Conditions | The Intellectualist
Posted by Craig at 5:49 AM No comments: 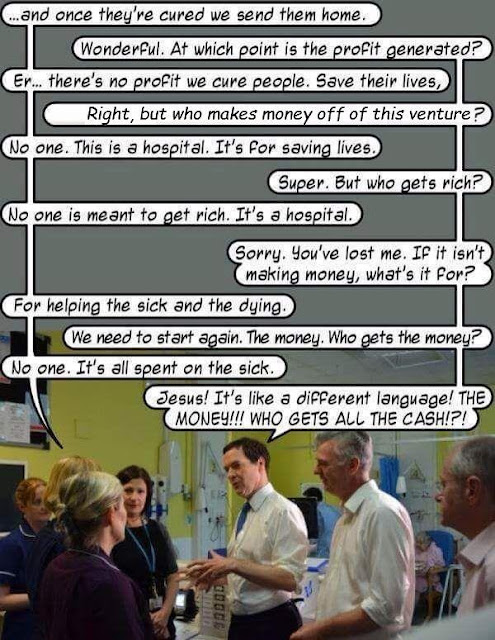 This is the real reason ObamaCare is sputtering

This is the real reason ObamaCare is sputtering
Posted by Craig at 6:45 AM No comments:

Health care needs single-payer system
Posted by Craig at 9:22 AM No comments:

In the gap: Two friends struggle without insurance | Post Register

In the gap: Two friends struggle without insurance | Post Register
Posted by Craig at 9:21 AM No comments:

Health Watch MN
Posted by Craig at 6:09 AM No comments:


NEJM Interview with Dr. Jonathan Oberlander
Closing comments:
When
we look at the entire patchwork of the American medical care system and
our insurance system there’re still so many holes in it, there’s so
much redundancy, and it’s so inefficient. And that’s why the single
payer idea is going to resonate far beyond whatever the outcome of the
2016 election is. Because when you have a health insurance that leaves
tens of millions uninsured, tens of millions underinsured, that is beset
by administrative complexity and is governed too often by profit,
there’s going to be an appetite for sweeping change. And whatever its
political fortunes are, and I don’t think they’re particularly good,
single payer is going to continue to speak to those who are disaffected
by what’s going on in American medical care and are looking for
something different, something better.
(The full 8 minute audio can be accessed for free at the link above.)
***
Comment by Don McCanne
Although single payer advocates may be disappointed with Professor Oberlander’s conclusion that the best way forward now
is to strengthen ACA and Medicare and to address underinsurance and the
affordability of private coverage, we need to keep in mind that he has
described the clear superiority of the single payer model, and that it
still has widespread popular support. His pessimism is based on current
political realities, which have been confirmed by over half a century of
failure to advance comprehensive, universal single payer legislation.
Since
single payer seems to be an imperative, why has it not been enacted?
Oberlander writes, “Single-payer supporters have not articulated a
convincing strategy for overcoming the formidable obstacles that stand
in its way. Nor have they, despite substantial public support for single
payer, succeeded in mobilizing a social movement that could potentially
break down those barriers.”
He’s right, based purely on results to date. We have a lot of work to do.
Posted by Craig at 5:55 AM No comments:

Politifact Confirms Bernie Sanders’ Healthcare Plan Will SAVE Every American Family $1,200/Year - AMUSMENTIC
Posted by Craig at 6:38 AM No comments:

Health care: We are nowhere near a single-payer system | The Seattle Times

Health care: We are nowhere near a single-payer system | The Seattle Times
Posted by Craig at 5:28 AM No comments:

Single-payer backers say plan would rein in costs   | Local News | newburyportnews.com
Posted by Craig at 5:24 AM No comments:

Editorial: High costs of hepatitis medicine make a good case for universal Medicare | The Salt Lake Tribune
Posted by Craig at 6:29 AM No comments:

This Single Working Mama Demands Single Payer and Sanders for President | The Indypendent
Posted by Craig at 6:28 AM No comments:

Despite Fears, Health Law Has Not Uprooted Employment-Based Coverage

Despite Fears, Health Law Has Not Uprooted Employment-Based Coverage
Posted by Craig at 6:18 AM No comments:

Single-payer backers say plan would rein in health costs | News | eagletribune.com
Posted by Craig at 7:11 AM No comments: