Reasons for Being Uninsured Among Adults Aged 18–64 in the United States, 2019

This report is important because it shows how well (or not) our health care financing system was working under full implementation of the Affordable Care Act but before the onset of the COVID-19 pandemic. It demonstrates that 14.5% of adults under age 65 were uninsured, and the primary reason was the fact that health insurance coverage was not affordable.

This confirms that the current health care financing system is not functioning satisfactorily, so intervention is an imperative.

What choices do we have?

*  Maintain the status quo. No politician supports this, and they shouldn't because it would perpetuate personal financial hardship, physical suffering and premature death.

*  Continue to implement President Trump's largely random policies designed to reduce government spending and regulation. The numbers of uninsured will continue to increase and actual health care will continue to be less and less affordable. Financial hardship, suffering and death would increase. Not acceptable.

*  Enact and implement Joe Biden's proposals for reform that would tweak the current system, leaving in place the Affordable Care Act and possibly adding a public option. Health care spending would increase, the burden of our profound administrative waste would increase, and many would still be left without adequate coverage. It would fail to achieve the goals of universality, affordability and administrative efficiency. We can do better, much better.

*  Enact and implement a well designed, single payer, improved Medicare for All. Coverage for all essential health care services would include absolutely everyone. Since it is funded through equitable progressive taxes, it would be affordable for each of us. The current administrative waste would be largely recovered, returning to society enough funds to pay, through equitable taxes, for the additional care required by those currently uninsured or underinsured. Universal, affordable, equitable, efficient - meeting all of our goals in a system we can afford.

We do need gifted leadership to move forward. Unfortunately that leadership was difficult to identify in last night's presidential debate. It's clear the current team has failed us. So do we take our chances on a new team that has already rejected the single payer Medicare for All model? Or might their political position be malleable?

Bill Kaplan: Healthcare coverage and protections in jeopardy | WisPolitics.com
Posted by Craig at 1:49 PM No comments:

Average International Market Pricing For US Pharmaceuticals—Lessons From Europe | Health Affairs Comment by Don McCanne Drug prices in the United States range from $4 for some generics offered through membership programs to $2,125,000 for Zolgensma - a treatment for spinal muscular dystrophy. The average drug spending is about $1,200 per person per year - $346 billion in 2019 - per capita spending that is twice the average of other high-income nations. Why? Prices are too high. Why? Essentially, we have refused to demand that the government regulate drug prices. We won't even demand that the government negotiate better drug prices for the Medicare program. We are back to proposals to allow drug purchases through Canada to take advantage of their lower prices. But there are tremendous logistical problems with that, not to mention that Canada, with one-tenth of the population of the United States, can hardly be expected to meet our needs without threatening the drug supply for their own citizens. Besides, it is somewhat silly for U.S. firms to ship to Canada drugs at a lower price and then send them back here with various private and government administrative costs added on to the prices. I have long said that we don't need to import drugs from Canada; we need to import Canadian drug prices instead. The anti-regulatory posturing on drug pricing may be coming to an end. As Marc Rodwin states, "The Trump administration and House Democrats agree that the US should use an international price index that averages prices paid by other countries (mostly European) to cap the US prices," though the Democrats' proposal is far more comprehensive. More importantly, Rodwin provides us with key lessons derived from the experiences of European nations. We may struggle with trying to reprice a two million dollar drug, but we cannot allow that to set a new standard in price gouging by the pharmaceutical industry. We really do need single payer, improved Medicare for All that includes comprehensive prescription coverage, but we need to be sure that our tax system is paying fair prices for our drugs. I just paid a $567 copay for a drug covered under Medicare Part D. Though I can afford that, too many can't. We need a health care financing system that makes health care affordable for everyone. Instead of paying prices that too many cannot afford, we can make funding through progressive taxes the great equalizer. Everyone can afford that, even President Trump (his taxes for a year not being much more than my copay for one drug?) 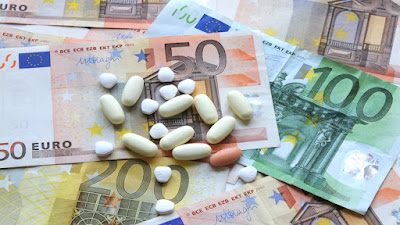 How many more studies do we need? The private insurance industry has to go. And, yes, we have a replacement: single payer improved Medicare for All. - Don McCanne

ACA Reform a Centerpiece of Biden's Healthcare Proposals | MedPage Today
Posted by Craig at 7:02 AM No comments: