Why Health is a Human Right | Tarbell

Why Health is a Human Right | Tarbell 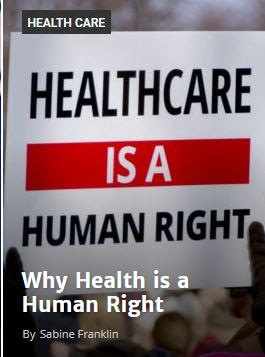 BENES Act would reduce complexity of Medicare Part B enrollment but ignore Parts A, C, D, and Medigap

A House committee unanimously approved legislation Wednesday that would make changes for the first time in 50 years to the complex rules for enrolling in Medicare's Part B, which covers doctor visits and other outpatient care.

Currently, seniors who don't get Part B when they first become eligible for Medicare pay permanent, recurring late enrollment penalties and can only sign up during the first 3 months of the year for coverage that begins July 1, unless they qualify for an exception. To make matters worse, they cannot buy other health insurance during their months-long wait.

Patients often find out they need Part B only after their provider or insurance company sends them a bill for services. That's because only Social Security beneficiaries currently receive a notice when they become eligible for Medicare.

If the measure, known as the "BENES" Act (Beneficiary Enrollment Notification and Eligibility Simplification Act), becomes law, the Centers for Medicare & Medicaid Services (CMS) and the Social Security Administration would be required to notify people before they turn 63, 64, and 65 that they may be eligible for Medicare at age 65. It would eliminate the waiting period by ensuring that coverage begins on the first of the month after they sign up.

Currently, far too many people make honest mistakes when trying to understand and navigate this confusing system. The consequences of such missteps are significant -- including late enrollment penalties, higher out-of-pocket health care costs, gaps in coverage, and barriers to accessing needed service. In 2019, 764,000 Medicare beneficiaries paid a penalty for late Part B enrollment, increasing their monthly premiums by an average 28%, according to a May report by the Congressional Research Service.

The House of Representatives is expected to pass the bill sometime this year but its prospects in the Senate are still uncertain.

Medicare Part A and B Eligibility and Enrollment
https://www.cms.gov/Medicare/Eligibility-and-Enrollment/OrigMedicarePartABEligEnrol

The eligibility, processes and rules for enrolling in Medicare are relatively complex and vary for Part A - hospital, Part B - physician and outpatient, Part C - private Medicare Advantage, Part D - drug, and Medigap - private supplemental coverage. Original Medicare is Part A and Part B, but enrollment is such that individuals may end up with gaps in coverage or paying significant penalties if the enrollment process for Part B is not followed carefully. The BENES Act would reduce this risk, though not eliminate it.

If you read the CMS eligibility and enrollment instructions for Part A and Part B (link above), you will see that they are unreasonably complex for a program that should be (but is not) automatic for everyone. Although the BENES Act would help, some complexities would remain, not to mention the problems with Part C, Part D, and especially with the Medigap plans. Medigap is particularly important for those who want to remain in the Original Medicare program, but the rules are such that enrollment may have underwriting penalties or coverage can be refused if the initial enrollment period was missed. In the push to privatize Medicare, they have made enrollment in the Medicare Advantage plans easier, but there are still rules to be followed, not to mention that you are limited to the insurers' provider networks and you lose your almost unlimited choice of providers in the Original Medicare program.

Compare this to single payer improved Medicare for All. Every resident is eligible and is automatically enrolled, forever. Benefits are comprehensive, including drugs, and since care is free at the time of service, there is no reason to have separate private or supplemental plans. There is no Part A, Part B, Part C, Part D, nor Medigap; there is only Medicare for All. 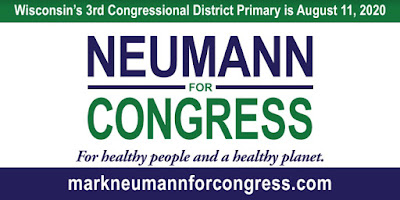 August 11th is the WI Primary Election. Mark Neumann and Ron Kind will be competing on the ballot for the 3rd CD Democratic Party Congressional seat. These are both great men who work to avoid negative campaigning about their opponent. I support Mark's stand on important issues such as access to health care and the environment.
https://www.markneumannforcongress.com/about/
https://www.facebook.com/DrMark.3rdCD.WI/
If you live in the 3rd CD I have signs like this for you to put out encouraging folks to vote Aug. 11th. Message me if you want one.

Join us for a series of video Town Hall meetings with Dr. Mark Neumann and bring any questions and ideas you have for the candidate!

Yard Signs are here! Your local county Democratic Party office may have them already; if not, email us at contact@markneumannforcongress.com to request one.


August 11th is the WI Primary Election. Mark Neumann and Ron Kind
will be competing on the ballot for the 3rd CD Democratic Party
Congressional seat. These are both great men who work to avoid
negative campaigning about their opponent. I support Mark's stand on
important issues such as access to health care and the environment.
https://www.markneumannforcongress.com/about/
https://www.facebook.com/DrMark.3rdCD.WI/

If you live in the
3rd CD I have signs like this for you to put out encouraging folks to
vote Aug. 11th. Message me if you want one. 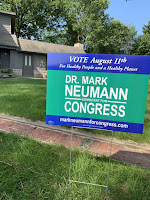 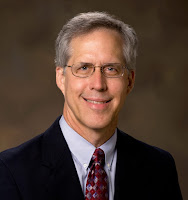 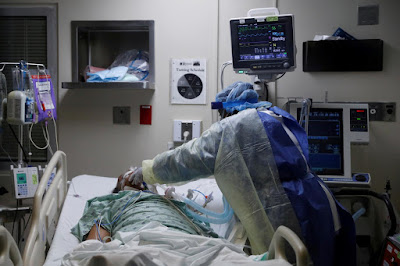