What Thailand can teach the world about universal healthcare | Health revolution | The Guardian
Posted by Craig at 12:34 PM No comments:

We have some serious problems in health care that need our immediate attention such as administrative  excesses, wasteful spending, impaired access, maldistribution of health care
resources, and financial barriers to care. But the health policy community is entrenched in efforts to  expand the administrative oversight of our system as somehow being the solution to problems they seem not to have defined. They are adding to the problem of administrative excesses while ignoring what really needs to be done.

Right now our government and the health care industry are deeply involved in drafting rules
for the Merit-based Incentive Performance System (MIPS) and the alternative payment model (APM) option as more studies are showing that such efforts are impairing professional satisfaction and increasing physician burnout -  more administrative excesses with detrimental outcomes!

We need to start thinking about the patients and a health care system that would best serve their needs. A single payer national health program is specifically designed to address the real problems noted in the first paragraph above. Patients are not looking to interact with personal data managers; they want health care, and they want it now.

More Evidence Against Health Insurance | The Beacon
Posted by Craig at 5:48 AM No comments:

The Fantasy of Single-Payer Healthcare in the States: Newsroom: The Independent Institute

The Fantasy of Single-Payer Healthcare in the States: Newsroom: The Independent Institute
Posted by Craig at 5:44 AM 1 comment:

Help With Health Insurance Choices
Posted by Craig at 6:16 AM No comments:

Not sure about what they say since this is a publication for people who want the corporations to make them money, but it has some comments worth reading.

Paul Ryan’s flimsy health plan - The Washington Post
Posted by Craig at 6:07 AM No comments:

Medicare, an effective program that needs expansion | www.myajc.com
Posted by Craig at 6:34 AM No comments:

Please comment if you know anything about this in terms of private insurance company's role.  These reports will be used to bad mouth government programs.  Two things - many of these programs are farmed out to private companies as the ones who pay the bills, etc. and if this is happening with Medicare and Medicaid, I assume it is happening with regular health insurance - but no one is allowed to know about it.
Posted by Craig at 6:24 AM No comments:

Supreme Court decision deals blow to health coverage efforts in California - LA Times
Posted by Craig at 6:09 AM No comments:

Filling a prescription? You might be better off paying cash - CNN.com

Filling a prescription? You might be better off paying cash - CNN.com
Posted by Craig at 6:00 AM No comments:

Health Care Costs Grow Dramatically Slower Than Expected After Obamacare
Posted by Craig at 7:25 AM No comments:

Big Money Loses. . . For a Change | Wisconsin Democracy Campaign
Posted by Craig at 12:20 PM No comments:

A Father's Day Letter To My Generation - Forbes

A Father's Day Letter To My Generation - Forbes
Posted by Craig at 7:31 AM No comments:

The Devastating Process of Dying in America Without Insurance | The Nation

The Devastating Process of Dying in America Without Insurance | The Nation
Posted by Craig at 7:14 AM No comments:

Do Dems Have a Path to Universal Health Care? - InsuranceNewsNet

Do Dems Have a Path to Universal Health Care? - InsuranceNewsNet
Posted by Craig at 7:13 AM No comments:

How a Political Revolution Brought Healthcare to a Nation - Free Press Online
Posted by Craig at 6:47 AM No comments:

This is worrisome but needs to be known about as we, hopefully, move ahead on universal access efforts.  Way too much of the argument here seems to be based on assumptions and observations that are not based on facts.  It also continues the rhetoric of public being bad and private for profit insurance companies being good.  It seems as complicated as the ACA.  We need a simple system and Medicare for All does that.
Posted by Craig at 6:44 AM No comments:

Since it is impossible to read all of the research studies on new drugs, we can be
thankful that we have the Food and Drug Administration (FDA) to collate
and evaluate all of that information so that we know that new drug
products released on the market have been demonstrated to be both
effective and safe. Or can we? This new study adds to our concerns.

With the politics in our nation being under the control of the pro-market
neoliberals and conservatives, the pharmaceutical industry and insurance
companies have been given a most favored status under the belief that
markets will serve the public better if not constrained by supposedly
excessive government oversight.

In the case of pharmaceuticals, the public can experience the benefits earlier of the
new blockbuster miracle drugs if the government (FDA) will just get out
of the way, or so they say. More recent laws and regulations have
allowed pharmaceutical firms to pay fees to enter an accelerated process
for new drug approval (like buying their way to the front of the
queue). This accelerated process has been expanded to include most new
drugs, ignoring the fact that there may be a conflict of interest when
firms can buy off government regulators to expedite approval of their
products.

To be sure that the information evaluated truly represents the value of the new drugs,
pharmaceutical firms have agreed to register all studies in advance and not just the
studies with favorable results. But research studies with adverse
results are still being filed away without public oversight, explaining
some of the reason that drugs on the market do not have the same
benefits and safety margin as the pre-marketing studies submitted to the
FDA show. Also the firms have promised close post-marketing
surveillance, but that seems to disappear once the drug is approved.
Also the firms are not required to compare new drugs with existing drugs
even though many turn out to be inferior. Yet with our lax rules on
direct-to-consumer advertising, a demand can be created for these new
drugs in spite of their typically outrageous prices. Now Congress is
advancing the CURES Act to further benefit the biomedical firms,
potentially at a cost to the public’s health that may offset the
benefits.

This problem is serious. The study by Saluia et al. shows that over 100 million
prescriptions were issued for drugs that had to be withdrawn from the market
because they proved to be unsafe. About 100,000 people die each year from
drug reactions, and this is particularly tragic when it is from a drug that never should
have been on the market in the first place.

The stewards of a well designed single payer system would demand much
better performance from the pharmaceutical industry - drugs and other
biomedical products that are effective, that are an improvement over
existing treatments, that are reasonably safe, and that are priced
appropriately based on legitimate costs and a fair profit margin.
Regardless, the government has to step up if we want better quality and
value in our nation’s drug supply.
Posted by Craig at 6:21 AM No comments:

Cigna-Anthem Deal: Connecticut Gov. Malloy Signs Secrecy Bill That Could Shield Insurance Information From Public Release
Posted by Craig at 7:35 AM No comments:

It seems intuitive that value-based insurance design (VBID), such as requiring much higher
patient cost sharing for low-value care (e.g., much greater
out-of-pocket payments for “unnecessary” CT or MRI scans), should help
reduce our total health care spending without inducing a major negative
impact on health outcomes. But the authors of this study find that
“increased cost-sharing may lead to modest increases in overall
healthcare spending,” even though it may reduce utilization of some, but
not all, targeted services.

Thus it appears that VBID may not be a very effective tool for reducing overall health
care spending. Besides, philosophically it does not seem right that
patients must face a financial penalty for obtaining the care that their
health care professionals have recommended.

If penalties were to be assigned for using low-value care, wouldn’t it be
more appropriate to apply them to the health care provider who would
profit by selling more health care services with very limited value? But
then how would you determine the threshold of what care is of value and
what isn't? Regardless, this report seems to provide an argument for
dispensing with penalties in health care.

Maybe since we haven’t had much luck with carrots and sticks, we should give
up on relying on intuition in implementing health care reform and
instead adopt a proven model that is highly effective in improving
affordability and access to health care for all - a single payer
national health program: Improved Medicare for All.
Posted by Craig at 7:14 AM No comments: 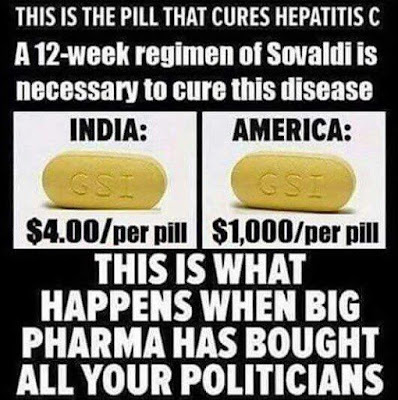 California voters are becoming more concerned about healthcare costs than about whether they have insurance - LA Times
Posted by Craig at 4:50 PM No comments:

Sanders: DNC vetoed union leader pick for platform committee - The Washington Post
Posted by Craig at 7:23 AM No comments:

John Oliver Buys $15M In Medical Debt, Then Forgives It – Consumerist
Posted by Craig at 4:41 AM No comments:

Join Citizen Action of WI for a conversation on a campaign to challenge Pharma's stranglehold on our communities!
Posted by Craig at 4:22 PM No comments:

2,000 US Doctors Call for Universal Healthcare

2,000 US Doctors Call for Universal Healthcare
Posted by Craig at 5:44 AM No comments:

Fix It Documentary Screening
Posted by Craig at 7:33 AM No comments: 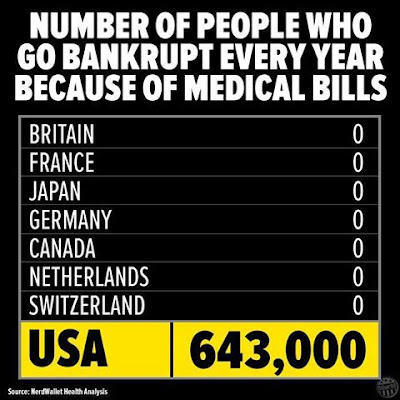