$0 Deductible: Low Out-of-Pocket Success Story - Citizen Action of Wisconsin
Posted by Craig at 10:08 AM No comments:

Johnson City Press: The many advantages of a single-payer health care system

Johnson City Press: The many advantages of a single-payer health care system
Posted by Craig at 6:42 AM No comments:

What an Oregon business group gets wrong about single-payer - Portland Business Journal
Posted by Craig at 6:41 AM No comments:

Paul Ryan's healthcare stance scrutinized - Citizen Action of Wisconsin
Posted by Craig at 10:57 AM No comments:

Expanded Corporate Crime Database Highlights Fraud by Healthcare Companies and Banks
Posted by Craig at 5:52 AM No comments:

Single Payer: Because black lives matter...and so does black healthcare | AL.com
Posted by Craig at 6:15 AM No comments:

Make the Public Option a Central Focus of the 2016 Campaign | The Nation
Posted by Craig at 7:18 AM No comments:

Once Again, Single-Payer Health Care's Chances Are Fading
Posted by Craig at 6:50 AM No comments:

While health-care pros fret about ColoradoCare, supporters say it will cure ills | PostIndependent.com

While health-care pros fret about ColoradoCare, supporters say it will cure ills | PostIndependent.com
Posted by Craig at 6:49 AM No comments:

Pro-painkiller lobby shapes policy amid drug epidemic
Posted by Craig at 6:54 AM No comments:

Need to outlaw corporations giving campaign $ and lobbying Congress and State Legislatures.  This is a good health care example.  Insurance companies also spend millions on this.

Merkley: 33 Senate Dems now back ObamaCare public option | TheHill
Posted by Craig at 6:31 AM No comments:

We need to treat access to health care as a right and the drug issue as a health care problem.Money is behind what we have now. Insurance companies are out to make a profit and their execs are out to make millions personally. My personal access to health care is NOT in their best interest. Take their money out of the system and move it into covering all and we will spend less with better outcomes. Prisons have become profit sources for corporations. Some are owned on run by corporations. Many sub-contract a lot of services to for-profit business, (food, maintenance, telephone access, etc. are examples). Incarceration as a response to drug use does NOT reduce the problem. In fact, it makes it more criminalized by being a 'school' on how to be a criminal and reducing the likelihood of being able to be legally independent and self supporting when released. Money spent on jails and prisons can be reduced and shifted to Portugal's type drug response. It would be less expensive and have much better outcomes.
We sure have a lot to learn from other countries.
Posted by Craig at 8:03 AM No comments:

Why Obamacare Didn’t Work | Jacobin
Posted by Craig at 7:29 AM No comments: Join us on September 19 at the Southdale Library at 6:00 PM for a presentation on Minnesota progress toward Affordable Health Care for All. Joan and Steve Januzs will explain about Single Payer, Universal health care, legislative issues, and what is happening with this important issue in out State.

Health Watch MN
Posted by Craig at 7:12 AM No comments:

Public Option Health Care Is Slipping Through the Back Door

Public Option Health Care Is Slipping Through the Back Door
Posted by Craig at 11:36 AM No comments:

Scott Deshefy: Single-payer is the cure for health care ills - Opinion - The Bulletin - Norwich, CT
Posted by Craig at 11:32 AM No comments:

Here's Why Abortion Advocates Won't Vote for Universal Health Care in Colorado | Mother Jones
Posted by Craig at 11:31 AM No comments:

Census Data 'Starkly Illustrates' the Time for Single Payer Is Now | Common Dreams | Breaking News & Views for the Progressive Community
Posted by Craig at 11:28 AM No comments:

Elizabeth Warren, US senators going after Aetna for leaving Obamacare - Business Insider
Posted by Craig at 7:29 AM No comments:

Yes, this is yet another report that confirms that enrolling in HSA-eligible
high-deductible health plans is associated with a decline in physician
visits and in high-value preventive services. This negative impact
occurs across all income levels but is twice as great amongst
lower-income individuals than it is for those with higher incomes.

Yet we continue to see a significant increase in enrollment in
high-deductible plans whether or not they are associated with a health
savings account. Slowing health care spending by reducing the use of
beneficial health care services is not the type of health care policy we
should be supporting.

Our current policies are creating more financial barriers to care; they are reducing our choices
in our health care professionals; they are increasing administrative
waste, and they have have inflamed an epidemic of physician burnout.
Yet we continue to let the medical-industrial wonks lead us down this path
to the everlasting bonfire.

Hey, aren’t we wonks too? We know a far better path - one that leads to health care nirvana. Why aren’t we doing the leading?

Robert Reich (Why a Single-Payer Healthcare System is Inevitable)

Robert Reich (Why a Single-Payer Healthcare System is Inevitable)
Posted by Craig at 8:55 AM No comments: 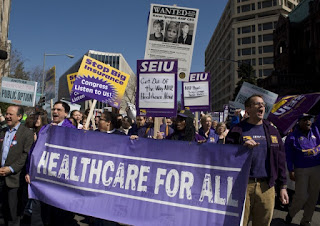 
Comment by Don McCanne
Over two-thirds of
health care in California - 71 percent -  is paid for by the government,
using our taxes. That is even greater than the national taxpayer share
of health care - 64 percent (increasing to 67 percent in 2024) - as
demonstrated by Himmelstein and Woolhandler.
As
Himmelstein and Woolhandler have stated previously, U.S. taxpayers are
already paying for a national health program, but not getting it. And
that is even more true for Californians.
California
has previously made efforts to adopt a single payer program, but they
have failed - in the election booth, in the state legislature, and on
the governor’s desk. As we continue to shift more of health care costs
to the government, we have brought along our terribly wasteful,
fragmented health care financing system. The California taxpayers are
getting a bad deal, and a very expensive one at that ($261 billion for
2016 in public spending alone).
Without
enabling federal legislation, states are limited in how close they can
come to a much more efficient single payer system, but that does not
mean that we should not proceed with whatever is possible now.
California,
and every other state for that matter, should do two things
simultaneously: 1) Advocate vigorously for a national single payer
program - an improved Medicare for all, and 2) Move forward on a state
level with improving the health care financing system so that eventual
transition to a national program will be that much simpler, not to
mention providing some limited interim relief.
Posted by Craig at 4:59 AM No comments:

Get ready for those rate hikes! Remember that the largest single cost in
health care is the bureaucracy, not doctors, nurses, and the service
you get and that you deserve. Single Payer will take care of that. It
will cut the insurance companies and fat CEO's out of the loop and put
your doctor in control of your own health again at an affordable cost.
Let's go for it!
Posted by Craig at 5:41 AM No comments:

Drugs and Privilege: Big Business, Congress and the EpiPen | Common Dreams | Breaking News & Views for the Progressive Community
Posted by Craig at 5:35 AM No comments:

It's Way Past Time We Stopped Deluding Ourselves About Private Health Insurers
Posted by Craig at 5:29 AM No comments:

Cry Me a River, Aetna | Common Dreams | Breaking News & Views for the Progressive Community
Posted by Craig at 8:22 AM No comments:

US Doctors Call For Universal Healthcare: "Abolish the Insurance Companies"

US Doctors Call For Universal Healthcare: "Abolish the Insurance Companies"
Posted by Craig at 7:28 AM No comments: